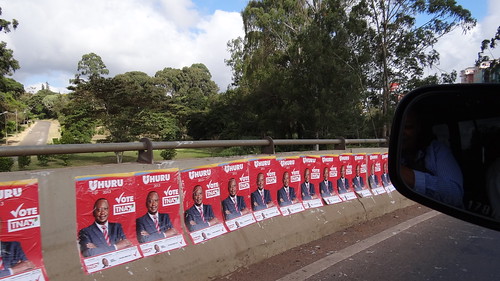 In the decade leading up to the 2017 election cycle, Kenya was on a positive democratic trajectory. The country has been on the front line in the fight against international terrorism, providing significant military assets for the struggle against al-Shabab in Somalia. It hosts huge numbers of Somali and South Sudanese refugees. Its security relationship with the United States is close, and the U.S. Navy regularly makes use of the port at Mombasa.

The Kenyan elite have close ties with the West, and U.S., British, and Kenyan nongovernmental organizations (NGOs) work closely together. Nairobi has a veneer of international sophistication, hosting numerous United Nations regional offices, acting as the business capital of East Africa, and attracting tourists from around the globe to the country’s celebrated game parks. Kenya’s success as a young, free-market democracy is directly in the U.S. national interest. Yet, this success has been set back by the 2017 presidential elections.

In the aftermath of its two flawed 2017 general elections, Kenya is a bitterly divided country. Opposition leader Raila Odinga refuses to accept the legitimacy of the most recent election and maintains that the victor and incumbent President Uhuru Kenyatta is intent on establishing a dictatorship. Moreover, Odinga has pledged to launch a “prodemocracy campaign” of picketing and boycotts, and has called for establishing a “people’s assembly” comprising religious leaders and civil society, among other groups, to govern the country until “legitimate” elections are held. He has yet to provide details on how this entity would function. Political and ethnic divisions exacerbated by the vote could lead to endemic violence and other destabilizing activity.

Curse of the Big Man

The 2017 elections show that Kenya has yet to overcome the African curse of governance by the so-called big man. Current examples of big men elsewhere on the continent who subordinate the interests of their countries to their own include Zimbabwe’s Robert Mugabe, Uganda’s Yoweri Museveni, and the Democratic Republic of Congo’s Joseph Kabila. Unfortunately for Kenya, it has not one big man but two: Kenyatta and Odinga.

The 2017 elections show that Kenya has yet to overcome the African curse of governance by the so-called big man.

The rivalry between the Kenyatta and Odinga families dates back to the independence period. Jomo Kenyatta, the first president of Kenya, is Uhuru’s father; Oginga Odinga, Kenya’s first vice president, is Raila’s father. Both families have prospered. Kenyatta’s personal wealth is estimated to be $500 million and Odinga’s, $250 million. The Kenyatta-Odinga family rivalry is a matter of personality and tribe; policy differences are of little importance, though Kenyatta is perceived as being “pro-business.” Odinga on the other hand is more “populist,” and he has widespread support in Nairobi’s slums. In 2017, as has been true in the past, Kenyatta’s Jubilee Party and Odinga’s National Super Alliance (NASA) coalition functioned as vehicles for their political ambitions rather than to promote alternative visions for Kenya.

Despite their rhetoric to the contrary and their Western style of dress, both Kenyatta and Odinga behave like tribal chiefs, the former of the Kikuyu and the latter of the Luo. In Kenya, tribal identity still runs deep, especially in rural areas and urban slums. Loyalty to ethnic groups largely drives how Kenyans have voted in past elections. While there are more than twenty ethnic groups, the three largest and most prominent are the Kikuyu, the Kalenjin (allied with the Kikuyu through Deputy President William Ruto), and the Luo. Intertribal quarrels over land or water use can turn violent. Especially in Nairobi, while some upscale neighborhoods are ethnically mixed, slums often have a distinctly ethnic character. In the countryside, the Luo dominate the western part of the country, while the Kikuyu dominate the Rift Valley and the central highlands.

Kenyans are haunted by violence associated with the 2007 disputed national elections, which morphed into ethnic conflict that left over one thousand dead and hundreds of thousands displaced. During a political, power-sharing interregnum brokered by UN Secretary-General Kofi Annan, Kenya wrote a new constitution designed to guarantee the independence of the judiciary, establish an Independent Electoral and Boundaries Commission (IEBC), and devolve significant power away from the capital to the country’s forty-seven counties. The power of the executive, and therefore of presidential big men, was reduced. The elections of 2013, in which Kenyatta won the presidency, were the first under the new constitution. This election cycle was less violent than that of 2007, and international observers deemed them significantly better, though Odinga and his supporters maintained at the time that the election had been stolen.

The August 2017 election was a rematch of the 2013 election, and Kenyatta was again declared the victor. In the aftermath, Odinga claimed, among other things, that Jubilee hacked into the IEBC’s system to manipulate the poll results. Further, citing his party’s parallel tally, he asserted he received the most votes. Odinga challenged the election at the Supreme Court, seeking for it to overturn the August election and order a new one be held. On September 1, the court did just that, ruling that the IEBC—the agency charged with conducting the election—had not followed all the requirements of the constitution. The court also required a new presidential election be held by November 1. The IEBC determined that the new election would take place on October 26.

In the weeks before the election rerun, Kenyatta attacked the judiciary, saying that the top court’s judges were bought off by “white people and other trash.” Kenyatta’s party introduced legislation that would curb the role of judges in future elections. For his part, Odinga insisted on wide-ranging changes to electoral commission personnel and practices. When these changes did not appear to be immediately forthcoming, Odinga called for the further postponement of the election. When that demand was not met, Odinga withdrew from the October election—though his name was still on the ballot—and called on his supporters to stay home. Throughout the hullabaloo, there was no significant dialogue between Kenyatta and Odinga.

In the days before the October vote, IEBC chief Wafula Chebukati expressed doubt that credible elections could be held. He said publicly that the commission was divided and politicized by a “creepy political class,” and that political leaders had “become the greatest threat to the peace and stability of the nation.” However, after the October 26 rerun, he flipped, saying that the elections had been credible.

On election day, turnout was 7.6 million, less than 40 percent of what it had been in August. (NASA disputes this figure, claiming turnout was much lower.) In about 10 percent of Kenya’s counties, voting was postponed in some constituencies because of the threat of a breakdown in security. The IEBC eventually canceled altogether the vote in those locations because, it said, returns could not affect the outcome, so large was Kenyatta’s margin of victory. Many of Odinga’s supporters stayed away from polling stations, especially in the western, Luo-dominated part of the country and in certain Nairobi slums. On the other hand, turnout was large in the Kikuyu heartland of the Rift Valley.

The IEBC has declared Kenyatta the winner, and he will soon be inaugurated. Odinga has announced that he is transforming NASA into a “resistance” movement, and that “peaceful” demonstrations, boycotts, and picketing will continue. He is seeking the buy-in of county governments to his people’s assembly, which would govern the country during an interregnum, though he has not said how members of the assembly would be chosen. Odinga’s goal is to force Kenyatta to step down, and the country to hold a new vote after a wholesale house-cleaning of those involved in elections.

There is anecdotal evidence that many Kenyans are tired of the political crisis of the past several months and merely want to get on with their lives. This is especially likely to be true of those who have a stake in the emerging modern economy and are already sympathetic to Kenyatta. However, tribal identity and partisanship still run deep.

So far, Kenyatta continues to resist calls for dialogue with the opposition and has made no overture to Odinga or his supporters. Odinga, for his part, is promising chaos—if not worse—unless Kenyatta steps down, though he has stopped short of explicitly urging his supporters to eschew violence. Democratic institutions are clearly under attack. Justices and members of the electoral commission have reported intimidation and death threats. A bodyguard for a Supreme Court justice was attacked days before the court was set to hear a case that could have postponed the election rerun. The judges were subsequently denied increased security by the administration, and consequently a quorum could not be reached for the case. Further, Kenyatta’s Jubilee Party continues its efforts to reduce the role of the judiciary in elections. Odinga’s proposal for a people’s assembly, while scant on detail, implies the wholesale corruption of those in charge. On the other hand, election results for seats in the Senate, National Assembly, and at the local level were not invalidated by the Supreme Court, though some have been challenged in the courts.

If instability in Kenya becomes protracted, as in 2007, the UN secretary-general might be required to mediate among rival Kenyan political factions. Certainly, the economies of neighboring Uganda, Tanzania, South Sudan, and likely others will suffer. Many countries in the region rely on Kenyan trade, financial services, and physical infrastructure. Were the political situation to deteriorate into widespread violence, Kenya’s neighbors could be drawn in in ways difficult to foresee. In particular, the potential for violence raises the question of whether Kenya can remain a safe haven for the hundreds of thousands of refugees from South Sudan and Somalia. If not, what would be the implications for other refugee movements in the region?

It is also likely that al-Shabab, which Kenya has been fighting for years, would move to take advantage of any power vacuum. The future of the currently close U.S.-Kenya security relationship, including the countries’ important antiterrorism partnership, would also be in jeopardy if there were a breakdown in government authority in Nairobi.

Kenya’s future is increasingly cloudy. Odinga’s decision to perpetuate and even increase current unrest through promised demonstrations, strikes, and boycotts, ultimately to advance proposals for an alternative government against a backdrop of deep ethnic divisions is, to say the least, irresponsible. How the Kenyatta government responds to ongoing provocation will be crucial for avoiding widespread violence. Restraint by the security services, already responsible for up to eighty deaths, is particularly important if peace and calm is to be restored. The unrest reported by the media in Nairobi appears to still be restricted to certain slums and has not yet morphed into full-blown ethnic conflict, like that following the 2007 election. Given Kenyan political fatigue, Odinga may be overreaching. Nevertheless, it remains dangerous to light a match near a powder keg.